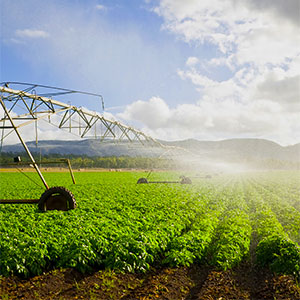 The best application for this sprinkler package is on sandy soils which will accept the higher application rates or on flat heavy soils which will seal over during the irrigation season if irrigated with a package that produces large droplets. Typically, small droplets reduce compaction of most soils and help offset the increase in application rate caused by the reduction in wetted diameter. These small droplets help prevent a reduction in intake rates as the season progresses.

The 360º spray nozzle package was developed mainly to improve the distribution of spray nozzles on Pivots, corner, and linear systems and for use with drops (3/4″ x 8″ or 48″) and booms (24′ and 48′). The nozzle orifice is made of tough, long-wearing plastic and the wear pad is made of durable urethane.

The spray nozzle can be modified to produce two different droplet sizes. The size is controlled by computer selection of a combination of nozzle and fixed orifice sizes, which produce the desired effect. The ‘standard’ package produces droplets which are slightly larger than those produced by the 8X package. This package does an excelent job of decreasing wind drift because of the 0º trajectory angle and because fewer driftable fines are produced. The spray nozzle can also be used to produce very fine droplets for use on very heavy, flat soils that would seal over if irrigated with the standard package. Because of the fine droplets, this package should be used only where wind drift is not a major concern.

The 10 spray nozzle produces a uniform spray. Fine, atomized droplets are practically eliminated thus both evaporation loss and wind drift are significantly reduced. The water droplet is nearly equal in size to the standard droplet on 20 spray nozzles. The diameter of the 360º pattern is only slightly smaller than spray nozzles operating at 20 PSI.