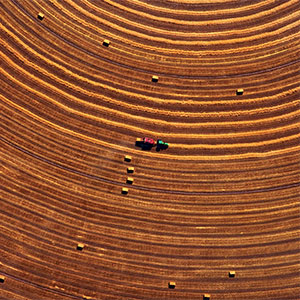 Water movement in the furrow between two crop rows of clay loam, silty clay loam and other soils that have low intake rates, is minimized, and often prevented, with furrow dikes, ripping, subsoiling and other tillage practices.

Tillage that helps hold water is an integral part of LEPA irrigation, especially on tighter soil with slopes of more than 1%. Water application rates are greater with LEPA because at least half the soil surface is not wetted.

Circle farming begins with marking the circular path the center Pivot will folow by making a revolution without water. Next, figure out the number of rows and row widths that correspond to the span length of a Pivot section.

Farming in the round

True, circle farming is different at first. Yet, it hasn’t prevented many growers from taking advantage of the benefits. Driving in the first span of the circle is often more difficult, but the crops go in each year. It is easier and better each try.

Exactness is not essential either, even with LEPA irrigation. A LEPA drop hose is flexible and is pushed to the side by crop leaves, especially in corn. The hose and head can temporarily drag over the crop in one row, then cross over if needed.

When crops are planted in a circle, the center Pivot never dumps all the water in a few furrows as it can when it parallels straight planted rows. Intense rainfall may cause more erosion in circle farming, but the dry furrow using LEPA helps.

One response to "Circle farming"