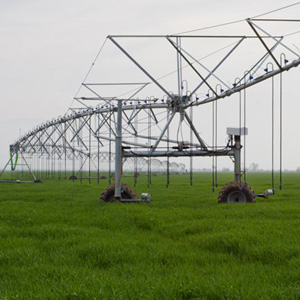 Irrigation efficiency involves the ability to minimize water losses. Such factors as loss of water from wind drift and evaporation from the soil surface and plant affect the level of efficiency. Meanwhile, another factor of irrigation efficiency is simply getting water into the soil, and controlling runoff. For mechanized irrigation, the biggest single advancement towards increasing irrigation efficiency has been mounting the sprinkler down out of the wind on drop tubes. Enabling the success of drop tubes are products that spread the water out over a wide area, even when mounted below the truss rods of a center pivot. These rotating, spinning and wobbling devices operating at low pressure have dual benefits, increased soak time and low application rates. A more complete throw pattern can give twice the soak time of fixed sprayheads.

Another sprinkler technological advancement is the use of dual nozzle clips. This allows two system flow rates to be used on the same machine, allowing use of lower flow rates to march Crop ET (Evapotranspiration) rates during germination, when water requirements are low.