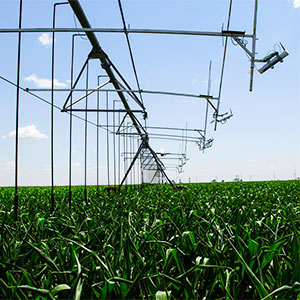 Companies in the US are working to turn Pivot systems into autonomous crop-growing machines with smart irrigation. They incorporate cameras and sensors into Pivot system equipment to eliminate weeds, apply fertilizer, and detect all kinds of diseases.

The brilliant ideas developed at Silicon Valley often need a strong partner from the agricultural sector. Take, for example, the alliance between an Israeli startup and a US Pivot system manufacturer. This partnership will enable large galvanized steel Pivot machines to be transformed into autonomous smart-irrigation robots that alert growers to problems with crops while weeding and fertilizing as needed.

Innovations enabling the Pivot system to operate by itself

Researchers monitored the chaotic nature of crops in a more controlled environment, where they could develop systems based on the data to solve the chaos, focusing on climate control, soil, and other variables influencing the greenhouse effect. Currently, the company works with hundreds of greenhouse operators to save water and manage crop performance through autonomous smart irrigation.

From here, the company sought a bigger playing field for its technology — large-scale cultivation — and began focusing on the Pivot irrigation system. Using images of the crops captured by drones, satellites, and cameras installed in the Pivot machine itself, this system alerts farmers to possible diseases or insect problems. Pivot machines will be able to optimize irrigation and, using complementary systems, the application of fertilizers and pesticides.

Once the company was ready to launch this service on the market, it partnered with a US manufacturer of Pivot systems that already had thousands of connected machines. This manufacturer had previously developed a technology that connects Pivot machines to the cloud, enabling farmers to monitor and control their machines from anywhere.

One partner brought their knowledge of the industry, Pivot systems, and how to work with growers. The other contributed automatic learning and artificial intelligence.

How does this smart irrigation system work?

The system detects mechanical and agronomic issues by monitoring images from drones, satellites, and the Pivot machine’s own sensors and cameras.

It is able to detect even the smallest malfunctions, like when a nozzle needs to be replaced. On the agronomic side, it can identify plots that are having problems and alert the grower. It is a virtual scanner of crops. The Pivot machine allows growers to assess the land with high precision.

In the near future, the company hopes to optimize irrigation by examining crop plans and plant stress, giving farmers the most efficient solution through smart irrigation. This will be done using a variable rate of water, fertilizers, and chemical products dispensed through the irrigation nozzles. With the sensorized Pivot system, growers can identity what is happening, analyze the situation, and act accordingly.