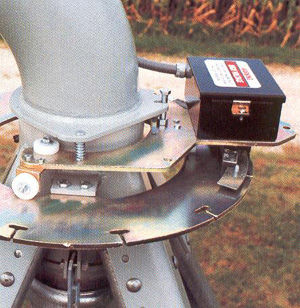 Mechanical closure unit of the end gun for assembling in the Pivot point. Opens and closes the end gun on the Pivot irrigation system, in different sectors.

1. Micro switches (overtravel plunger) placed on top of the center pivot under the collector ring; in some models located within a control box. One of these switches can also make the stop-in-slot at a given point.

2. Circular disk where small ramps with bevel are strategically held to drive the operation, through which the switches run when Pivot irrigation systems are working.

Each time the end gun switch raises the ramp, the current stops through the solenoid installed at the end of the system. The solenoid controls a valve that shuts off the flow of water when no current passes through it. The end gun is reopened when the actuator microswitch lowers the ramp.

Companies in the US are working to turn Pivot systems into autonomous crop-growing machines with smart irrigation. They incorporate cameras and sensors into Pivot system equipment to eliminate weeds, apply fertilizer, and detect all kinds of diseases. The brilliant ideas developed at Silicon Valley often need a strong partner from the agricultural sector. Take, for…